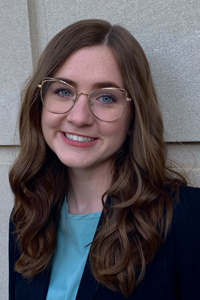 Taylor Dempsey is a junior in the College Scholars Program pursuing a major entitled “Immigration Studies with an Emphasis in Latin America.” Taylor’s program focuses on the cultural and institutional norms associated with the immigration system, as well as the forces that encourage Latin American migration. By taking classes from the Sociology, Anthropology, Political Science, Philosophy, Economics, and Hispanic Studies departments, she studies the culture of migrant communities as well as the xenophobia, racism, classism, and violence executed by the U.S. immigration system.

Throughout her time at UT in the College Scholars and Chancellor’s Honors Programs, Taylor has had many opportunities to learn more about this topic and work towards more just immigration policy. Co-founding Students for Migrant Justice, a UT student organization dedicated to educating the campus about the immigration system, mobilizing for migrant justice on-and-off campus, and empowering student migrants, has allowed Taylor to work with community coalitions organizing campaigns against Knoxville’s anti-immigrant policies, like the 287 (g) agreement. She has also served as a VOLBreak Leader, leading UT students on a trip to Austin, Texas to learn more about immigration policy and activism, as well as a volunteer English as a Second Language instructor at Centro Hispano de East Tennessee. Additionally, she works as a Student Assistant at the International House, assisting programs that promote cross cultural learning and welcome international students.

She has also had the opportunity to work closely with her faculty mentor, Dr. Gary Uzonyi, on a research project focused on post conflict justice and human rights violations. Their research was accepted to the International Studies Conference as well as the Conference in Disasters, Displacement, and Human Rights. During her summers, she has served as a judicial intern at Shelby County Juvenile Court and an intern at the Allies of Knoxville’s Immigrant Neighbors to study juvenile justice, Knoxville immigration policy, and the collaboration between the police and ICE.

In the future, Taylor plans to pursue a dual Juris Doctorate degree and Master’s in Social Work in order to work as a criminal defense and immigration attorney, defending immigrants accused of crimes. She plans to fight for just immigration policy and the dismantling of oppressive political and economic institutions.

The flagship campus of the University of Tennessee System and partner in the Tennessee Transfer Pathway.